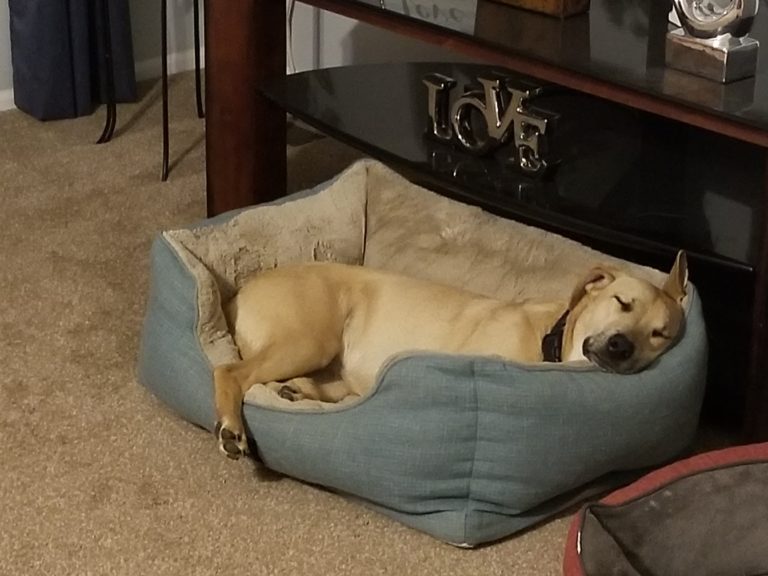 Minnie was a dog who came into our shelter confused and scared of people. She would take a long time to warm up to new people and would sometimes lash out in fear. She was adopted a few times, but was quickly returned to the shelter each time.

Until Greg & Debra came along. These two took a chance on a dog who did not immediately come running up to give them kisses and tail wags. Instead, they saw through her fear, and saw a dog that just needed a chance. This story is a great example of what can happen with a lot of patience and a lot of love for a dog who just needs someone to have faith in them.
Read below to hear about Minnie’s story from her adopters, Greg & Debra!
1) What drew you to Minnie? When you heard about her behavioral challenges, what were your thoughts?
We were looking for a dog to foster, and thought Minnie would fit in well with our other two dogs that are her age and size. When we found out that she had been adopted twice, only to be returned, her story pulled at our heart strings. We felt she deserved a chance to find a permanent loving home. We are long-time dog owners and felt we had the experience to deal with her introvert/aggressive behavior.
2) How was Minnie when you first met her? What kept you motivated to keep coming to see her?

Minnie was shy and hid behind her handler the first time we met her. On the second or third visit we introduced her to our other two dogs. She played well with with them and warmed up to us a bit; I think mostly because we had treats. We could tell that she got along well with the Five Acres staff and felt like we could help her trust all humans again. We just couldn’t get over the thought that she had been returned to the shelter twice! We felt it was our job to socialize her so she could find a loving home.

3) How was Minnie when you first brought her home?

She seemed scared and nervous at first. We were forewarned that she was very protective of her space and probably shouldn’t use a kennel; but since she wasn’t potty trained yet, we decided she needed to spend the night in a kennel. She growled and tried to bite us when we tried to get her out of the kennel for breakfast or to go out to potty. But, after 3 weeks of fostering, we saw how much she improved around us. She had won us over, so we officially became foster fails!

4) Has Minnie made progress? How is she now?
She has turned into a big love bug and just absolutely loves attention. She loves wrestling and running with her dog sisters and going to the dog park. She is absolutely fascinated with anything that squeaks or bounces. She’s still a little shy around strangers, but it doesn’t take her long to warm up to you.